So we’ve decided to fund our quest for world domination by getting a booth at the Salt Lake Comic Con in September.  No, it’s not just a ploy to be able to meet Adam West in person – you know inators don’t pay for themselves!  Anyways, we’ve been working on these great little  Steampunk conversions of toy and Nerf guns.  Here is some of the early work – more to come: 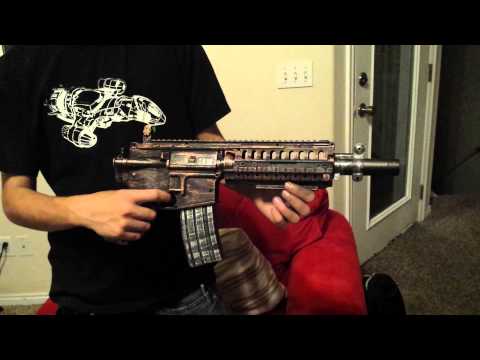 front and back making progress

adding silver to grip and clip

(hint: hit the reset button right before uploading your sketch), I decided it was was time to build a more permanent model.  Following a pretty good instructable, I was able to knock this out in no time.  And it worked on the first try!

I added the red LED in the upper left hand corner to show when power was flowing through the voltage regulator, something I found very handy in the  Borduinoinator.

I think for the next one, I’ll try moving the power supply, as shown here. Also, I’ll probably do more connecting the traces on the underside for less cabling, but it was nice to be able to “see” everything up top on this first model.  I’ll also use better wire – I used breadboard cross-connects, which melted a little bit when I soldered them.

My actual cost for this bad boy was $8.33, which isn’t too bad.  I’ll be going back to the Breadboard for development of some things – mainly because my soldering is a little weak, but it will be nice to be able to use these for the final products!

Behold the beauty of a blinking LED: 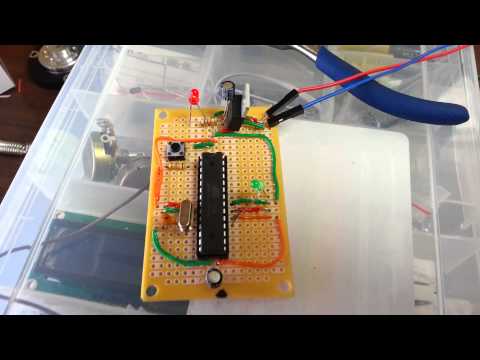 So, my crystals came from Amazon today, and I rewired the Boarduinoinator using instructions from the Arduino site.  Man, was it a lot easier than my last attempt.

Now you can see the first wiring on the left – it’s kind of a spaghetti mess with the really long cables connecting everything.  On the right you can see the results once I cut some jumpers to length.  Unfortunately the jumper kit I ordered was a big disappointment.  Instead of 140 pieces, I got 38 and they were all very long cables.  So I had to cut the long ones down to the lengths I needed.

The nice thing is that now it will be much easier to see how to wire this up on a perfboard, which is the next step.

So, I’ve been digging working at the Transistor Hackerspace.  It’s got a lot of knowledgeable people who know a lot more about electronics and programming than I do.  However, it’s a little father from home and work (about 15-20 minutes each) than would allow me to pop in and work on a project when I have a little bit of free time.

So I made a mini workshop by picking up a couple of “medium” storage containers from Harbor Freight Tools.  They were on sale for $2.00 a piece.  Man I love that place.  There are so many possibilities for awesome inators lurking within it’s walls.

Anyways, my resistors and capacitors already came with their own boxes, and the rest of the components I had on hand fit, with room to add an Arduino with my ArduinoISP Deluxe Shield – ATtiny / ATmega programmer (which I can’t recommend enough!) .  All this fits in one of the pockets of my laptop bag, so I’ve got all of it wherever I go.  If I add a soldering kit and some mini-screwdrivers, I could probably setup shop anywhere and build a device to upload a virus to an invading alien horde.

Sheesh – enough with the chickens already, you’d think I was writing a farm blog here or something.  Anyways, my main goal for the year is to build a robot army to take over the tri-state area.  I had some great success with my prototype, but I was using off the shelf Arduinos

alone! Who’s got that kind of budget?

So I started looking around and found these great plans to make your own Arduino clones for like $8 a pop.  That would save me $320,000!  That’s a lot of pastrami on rye, let me tell you.  Anyways, I decided to make one on a breadboard first, because I wanted to make sure I could pull this off before I soldered a punch of stuff together.  I found another Instructable where they show you exactly how to do that, and even give you a printable template to put on the breadboard.

I tell you what – this was not the greatest idea I ever had.  The template didn’t line up exactly with the breadboard, I only had super-long jumpers left (to be used in place of their 0 Ohm resistors – really 0 Ohm resistors??) and the breadboard version is not as cleanly laid out as the perfboard one.  On top of it all, I couldn’t find my 16Mhz crystals anywhere!  So I ordered some more crystals at Amazon

, so we won’t have so many long cables in the way.  Tuesday we’ll fire this baby up and see how long it can run until it blows up on me.

So, I got really tired of cleaning the chickens’ water about 100 times a day.  They sure are fowl creatures sometimes.

Anyways, I decided to make some Chicken Waterinators that they couldn’t kick full of bedding as soon as I put them in the brooder.

I bought a 50 pack of chicken nipples from Amazon.com

, and used a couple of old fast food drink cups and had perfect brooder size waterers – with no mess!

Chicken Waterinator installed into the brooder

Behold, the power of my Cable Organizator.  No longer will i buy cables that I already own!

Now, I’m trying to remember why I have a bin labeled “wireless”, because this is an inator for storing wires, so why would I need wireless wires?  I need to keep better notes when working on these projects…

I’ve setup a ChickenCaminator to lull the citizenry of the tri-state area into a false sense of peace. You can visit the chicken cam, but it might only work in Firefox or Chrome.  If it asks you for a password, use the User ID “public” (without the quotes) with no password.

Some of the most classic evil is breaking law, and I’m working evil like crazy this spring.

Stupid Danville outlawed raising chickens unless you’re on a gazillion-acre farm.  Probably because raising chickens was one of the few things I was better at than my brother Roger when we were growing up in Drusselstein.  Anyways, I decided to stick it to the man by raising my own flock of chickens this year.